You are here: Dyslexia
Print | Email 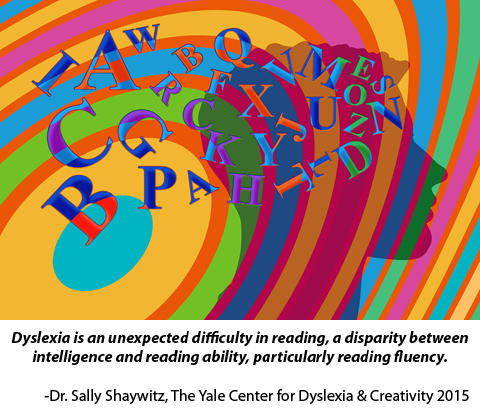 Dyslexia was recognized in the late nineteenth century and was specifically referred to as “word blindness” at that time.  Today, it is often incorrectly understood to be a reading problem whereby letters are typically reversed thus creating confusion for the individual attempting to decode words. Letter reversal is only a small indicator among many traits associated with dyslexia and do not necessarily mean an individual is dyslexic.

Reading is not naturally inherent.  It is an acquired skill that must be learned. The foundation upon which these skills are built is called "phonemic awareness."  Phonemic awareness is the ability to understand that words are composed of sound segments (phonemes) and that these words can be represented by letters of the alphabet.  It involves the ability to recognize, think about, and manipulate the individual sounds in words.

Dyslexic individuals are frequently unable to recognize sounds or words that rhyme and may have demonstrated a speech delay as toddlers.  Additional struggles may manifest themselves later on in school, and may include a lack of understanding spoken or written language, and in the organization, storage, and retrieval of language information.  Often with individuals who have dyslexia, phonemic awareness is not yet mastered, and, as a result, the foundation to becoming a skilled reader is not formed.

According to the International Dyslexic Association, dyslexia affects twenty percent of the population; that is, one in five individuals.  It is a genetic condition that is neurological in nature and has absolutely nothing to do with a person’s level of intelligence.  In fact, individuals with dyslexia are bright, have average to above average IQs, are typically highly creative and intuitive, and learn best through hands-on experience.  Physicist Albert Einstein, inventor Thomas Edison, and Danish author Hans Christian Anderson were all dyslexic.

Research has determined that dyslexia symptoms can often be recognized in children as early as five years of age.  In accordance with the International Dyslexia Association, common characteristics of dyslexia may include:

Research also tells us that, more often than not, individuals with dyslexia remain unidentified until grade 3.  According to Dr. Sally Shaywitz, author of the book Overcoming Dyslexia, “it is not unusual for dyslexics to go unrecognized until adolescence or adulthood.”  By then, the gap has widened significantly and treatment may be very lengthy.

Studies conclude that the ideal window of opportunity for addressing reading difficulties is during kindergarten and first grade.  While it is still possible to help an older child with reading, those beyond third grade require much more intensive help. The longer it takes for a child with reading difficulties to get proper intervention, the harder it will be for that child to catch up.  Early intervention, therefore, is key.

Medical advances such as functional magnetic resonance imaging (fMRI), have made it possible for scientists to determine that dyslexic individuals have neurobiological "glitch" in the neural circuitry in the brain which affects their ability to read.  Amazingly enough, researchers in brain plasticity have observed and concluded that with proper reading intervention, the human brain can begin to "re-wire" itself by developing alternate neuro pathways after just one year of effective program implementation that include simultaneous multisensory teaching practices.  Just like anybody else, people with dyslexia can and do learn how to read when specific methods of instruction are put into practice!

According to the prominent dyslexia researcher Dr. Sally Shaywitz, in her book Overcoming Dyslexia, the key ingredients of effective early intervention programs are systematic and direct instruction in:

Programs offered at the The Literacy Clinic are based on every one of these instructional components.